The oven baked honey-ginger chicken has got to be my favorite chicken dish of all time. It’s not new, but I did develop the recipe myself after eating some honey-ginger salmon (it was so good) a friend made. 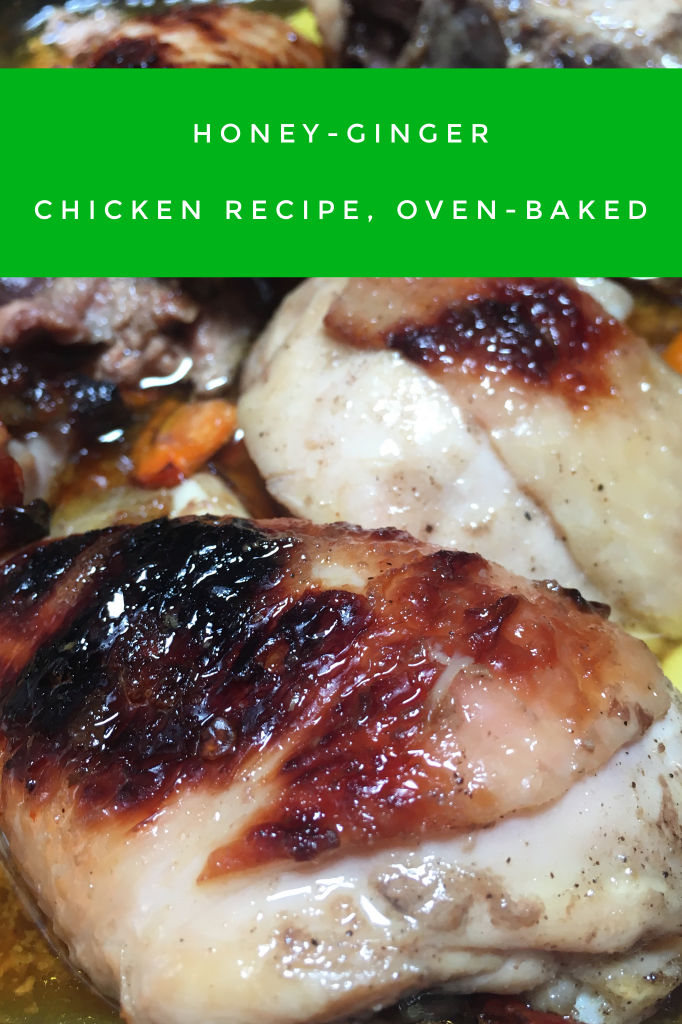 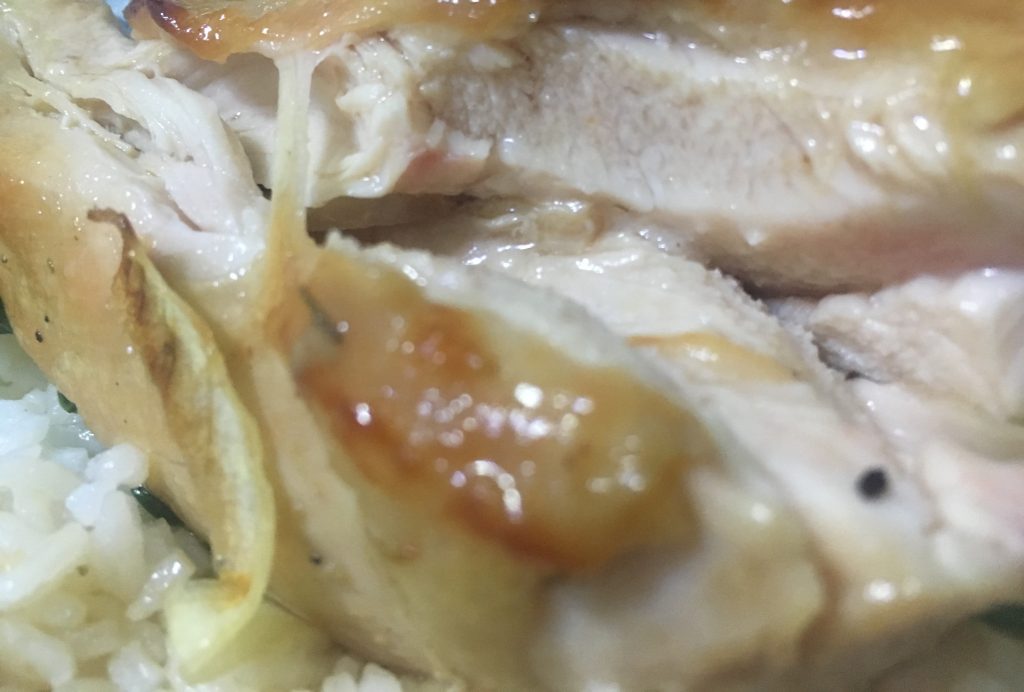 Preparation time: 10 minutes, including preheating the oven, cutting, and mixing.

Cooking time in the oven: 20 minutes (10 minutes for each side)

Total: Only around 30 minutes.

The time needed for you to actively be involved is only about 10 minutes. You can use the 20 minutes to, say, cook some rice or side dishes…or just play a few rounds of Rocket League like I do.

Now, I’m going to write this in a step-by-step way, so that even inexperienced cooks can do it. I implore that you at least look at the pictures. The simplified recipe sheet can be found at the bottom.

Okay. Let’s not waste any more time. It’s time to go over the ingredients needed for this recipe.

4 pieces of chicken (per container)

Any part will do. With or without the skin, your choice. 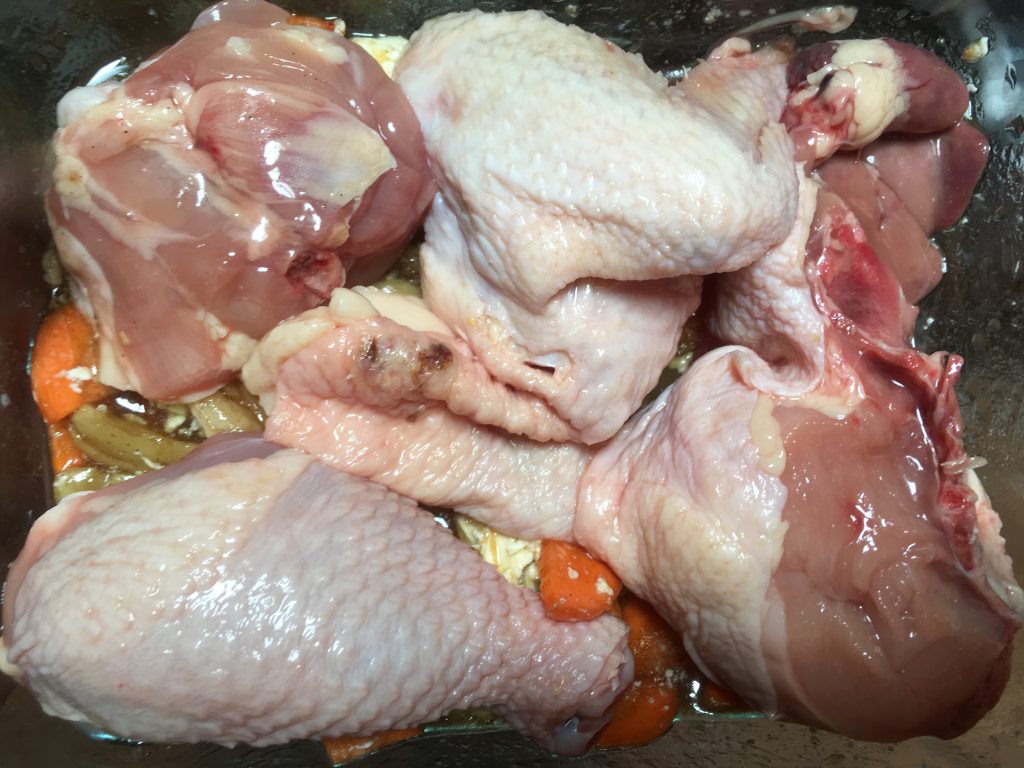 Preferably olive oil, that is. You can use any oil you currently have, such as vegetable oil. 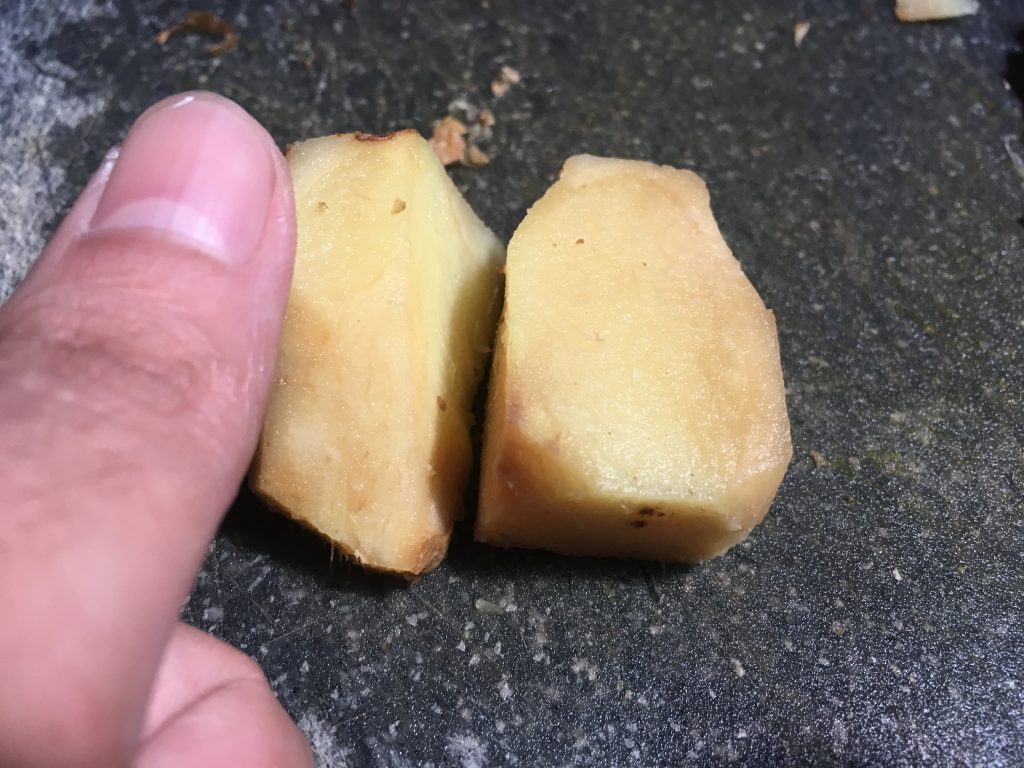 This is highly optional. I’m using carrots this time.

Generic supermarket honey would do. You know, that squeegee bottle of what’s technically 100% honey but not really. 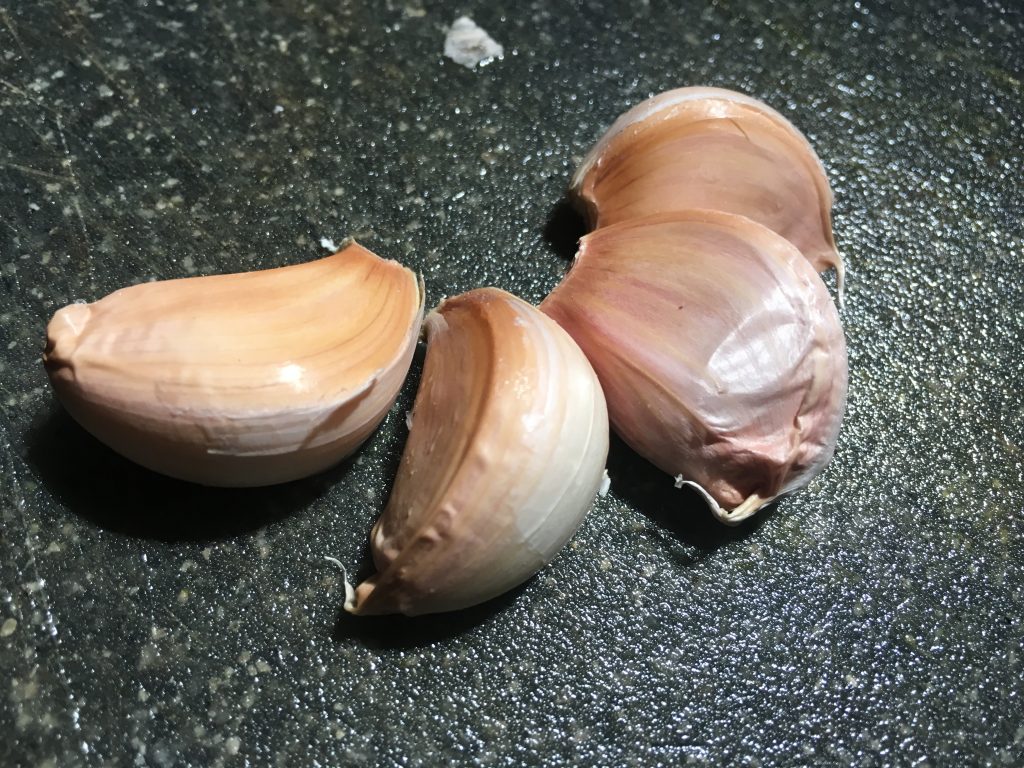 This should be pretty widespread even in non-Asian stores. Or just get them off Amazon. 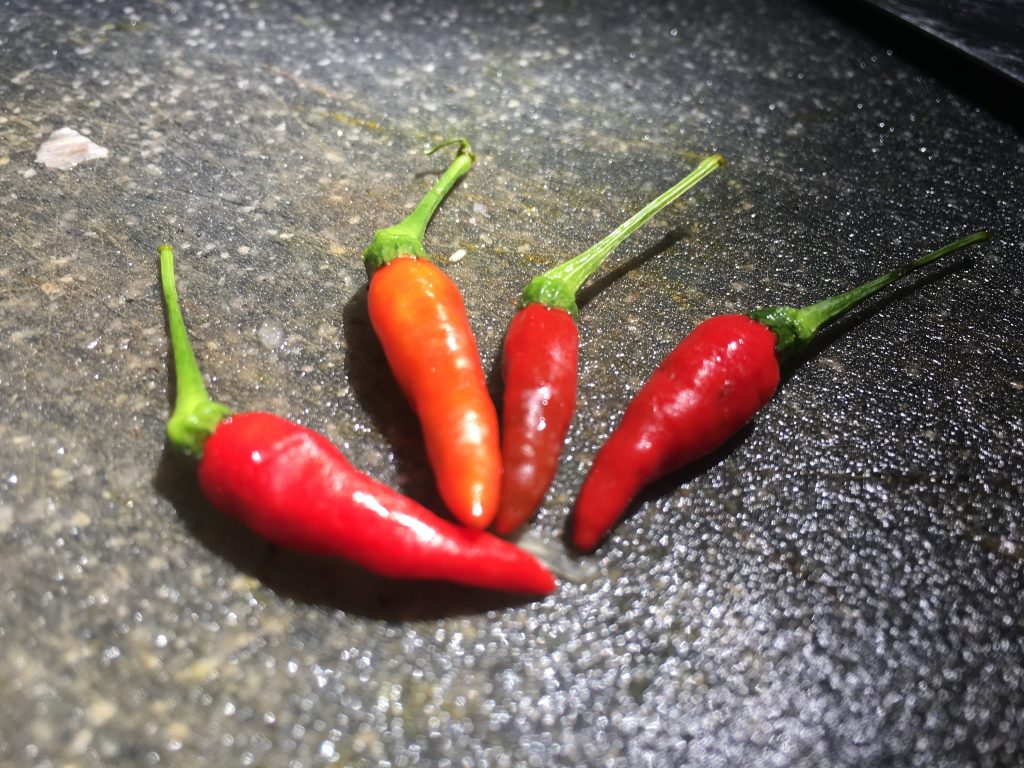 Going over the above ingredients made me realize that the number of ingredients can be quite intimidating for some people, especially those who are still new to cooking. If you are, worry not!

Oven cooking is pretty…handwavy. Like, ehhh, as long as you kind of have the right ingredients, can turn some knobs, and don’t mind waiting, it’s pretty hard to screw up. That’s the beauty of oven cooking…well, except for baking cakes. That’s for rocket surgeons.

A convection oven, of course. 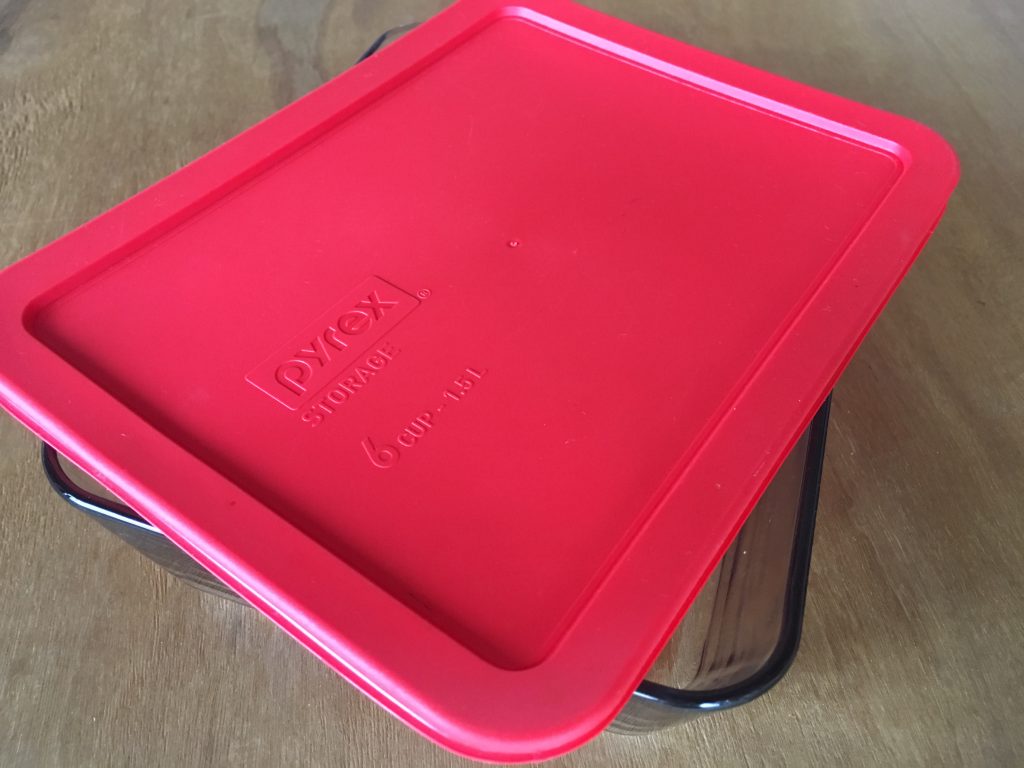 You can find the recipe card at the bottom. However, I implore that you at least glance at the photos first. I want this to be as clear as possible even for newbie cooks. Let’s get started!

Set your oven’s temperature at about 180 degrees Celcius, or 350 degrees Fahrenheit. Just somewhere below 200 Celcius (390 Fahrenheit). 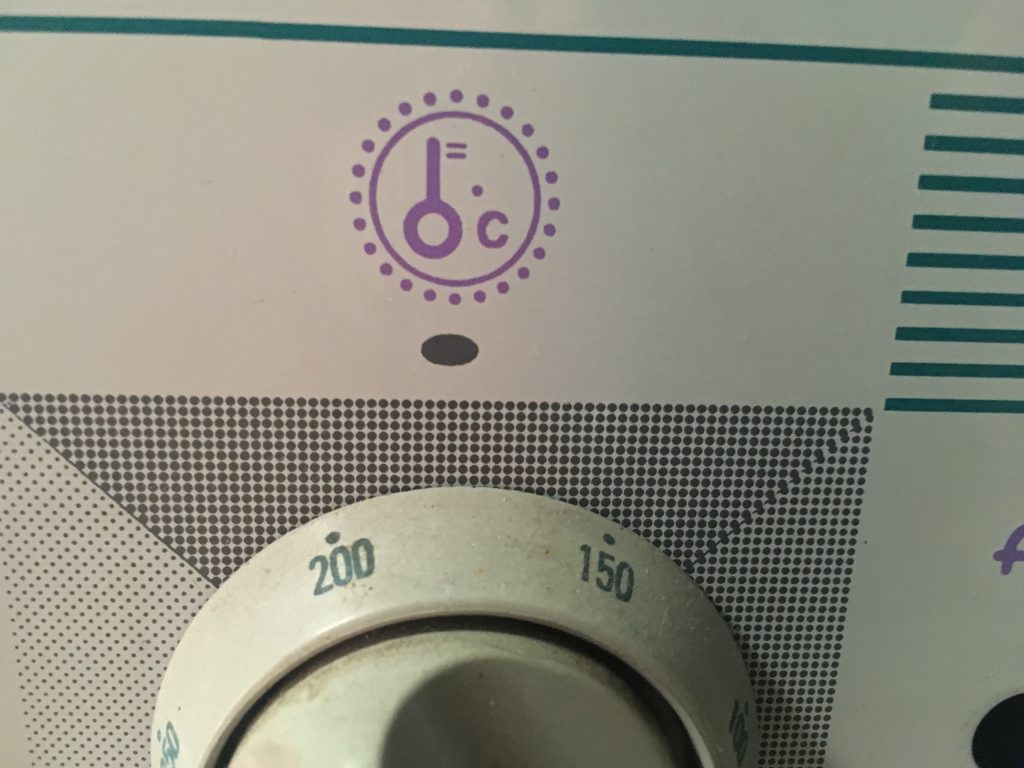 We’re gonna use the top coil only (grill/broil). Turn the dial to the spiky icon – it should be the same on your oven as the icon has been standardized in the industry. 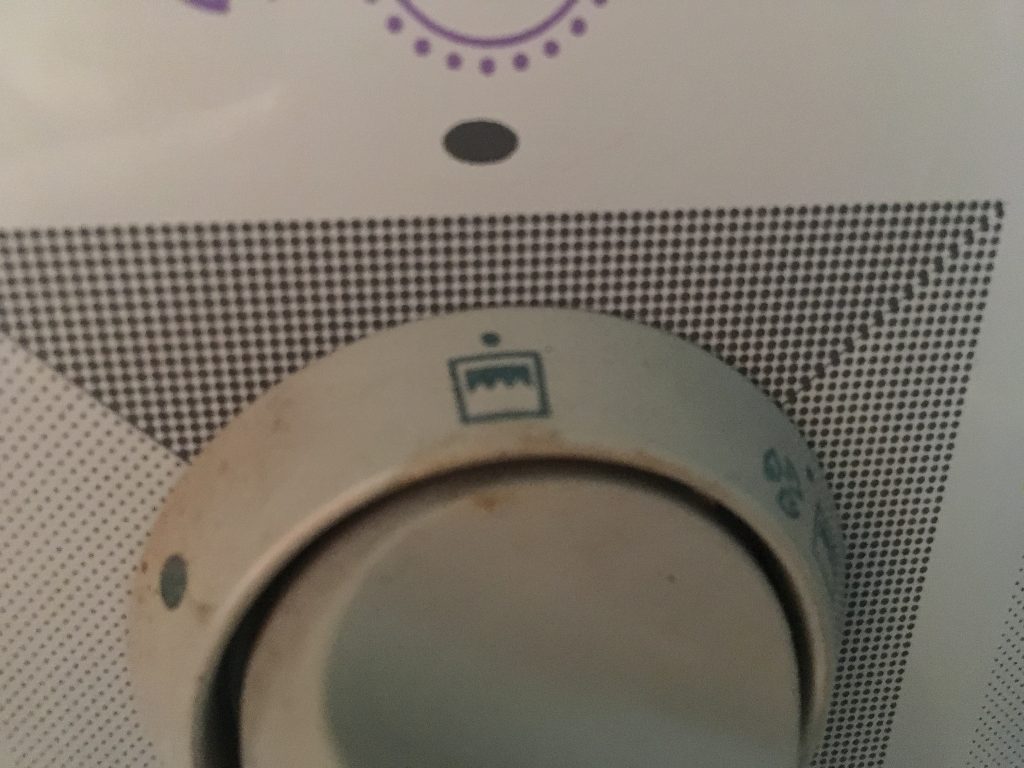 Set a timer for 10 minutes. I like setting it on my phone because sometimes I don’t hear the oven ding. Setting timers is the only use I found for Siri nowadays, to be honest.

Let’s start with the smaller ingredients first. First up, garlic. Now, there’s no need for a garlic press or something like that. Great idea in theory but frustrating in real life.

Just crush the cloves with your palm on the side of your knife and pinch the skin off. 4 cloves should be enough for 4 pieces of chicken. 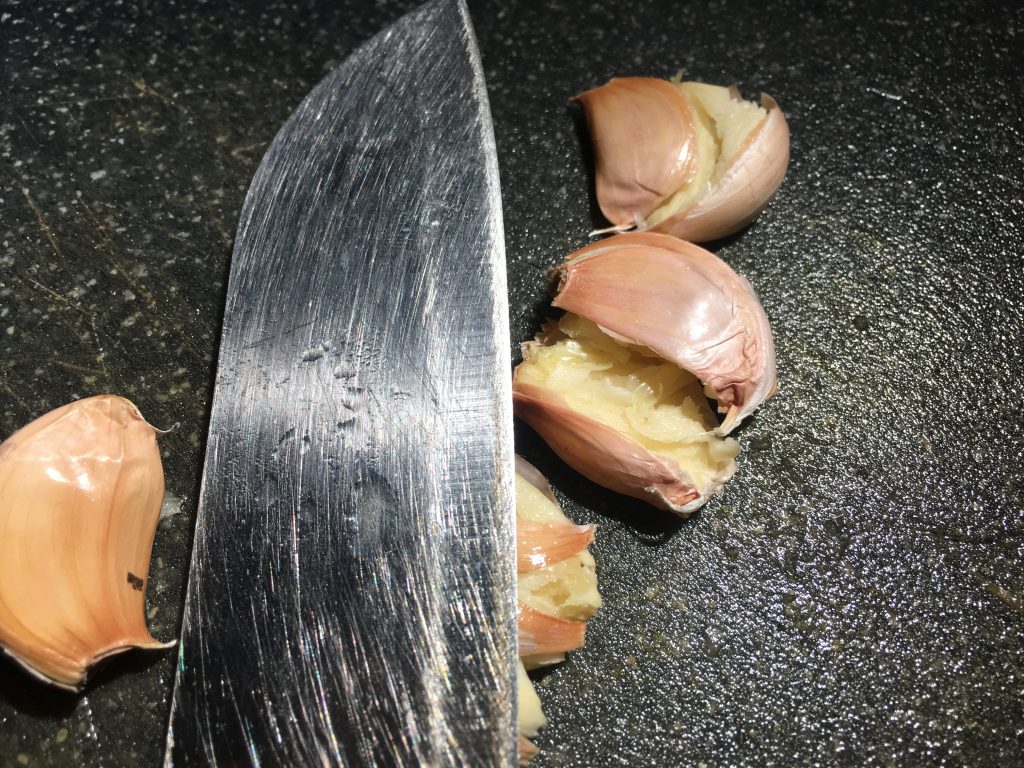 Now, the ginger. We’d need two thumb-sized pieces. Cut them into a couple more smaller pieces and then, like the garlic, crush them with your palm on the side of your knife. 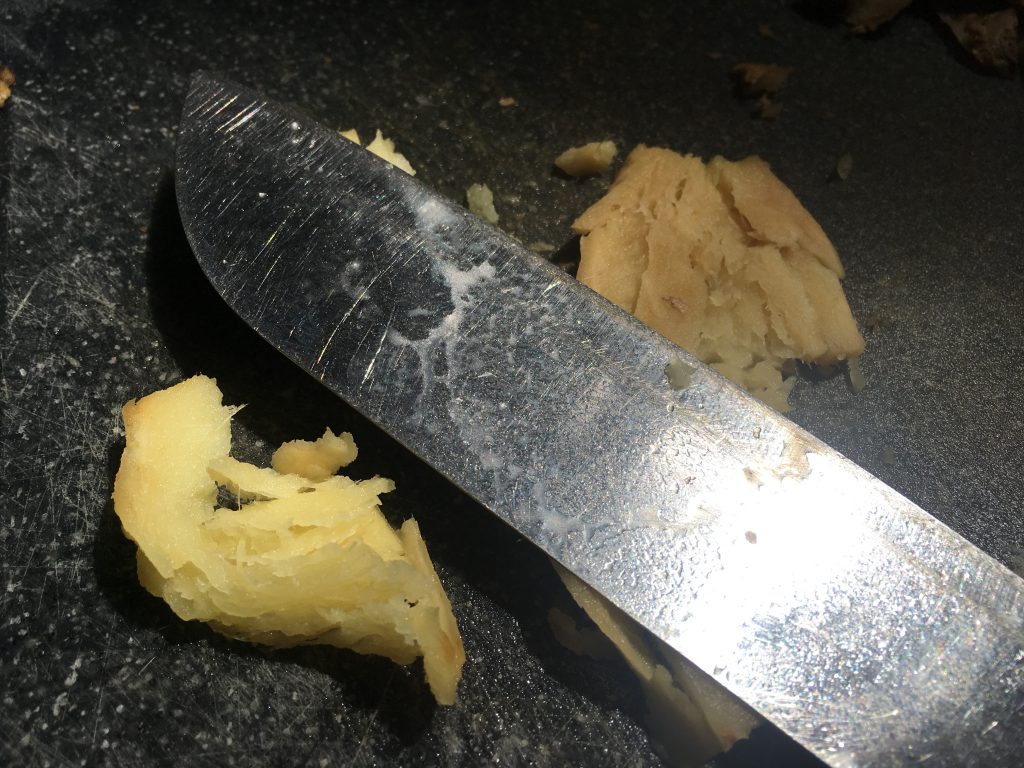 This is optional – add small carrot or cabbage slices. This time, I’m using a carrot. No need to use much, just around the same amount as the garlic cloves. 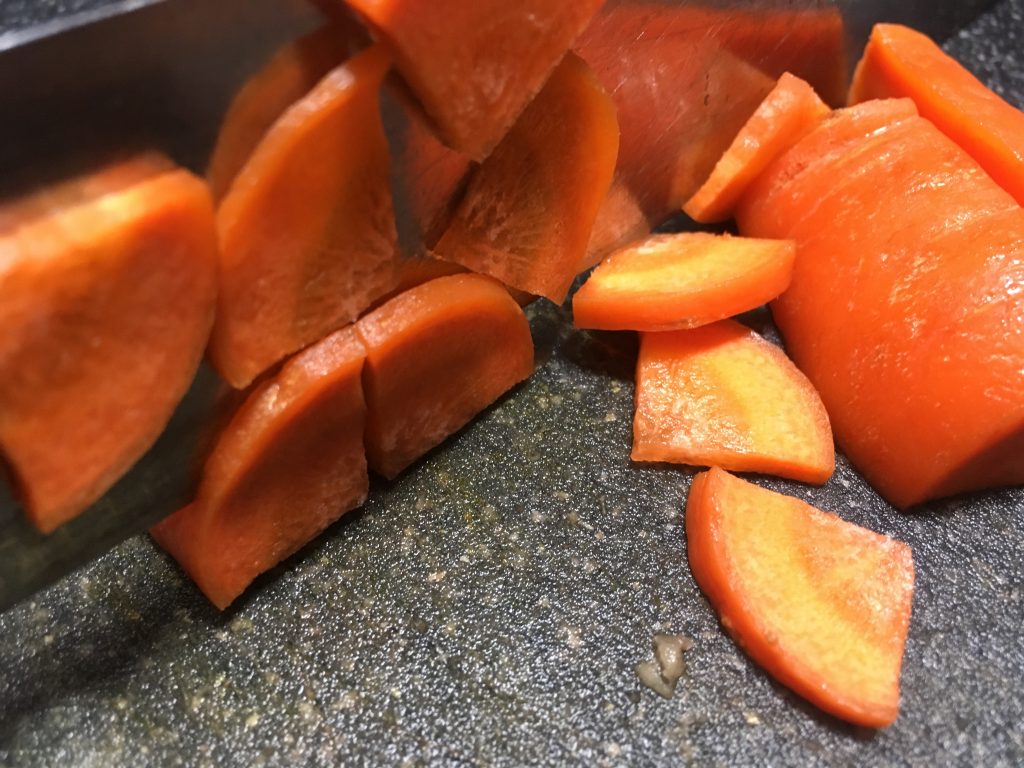 Personally, I like the dish with some punch. Thai/bird’s eye chili is about half as hot as habaneros. You can get them dried or fresh – I like the latter. We’d need 4 of those.

Simply cut lengthwise. We want the seeds, really. 1 chili for every chicken piece gives a subtly spicy taste. Add one or two more if you want more heat. Don’t be fooled by the small size, though. 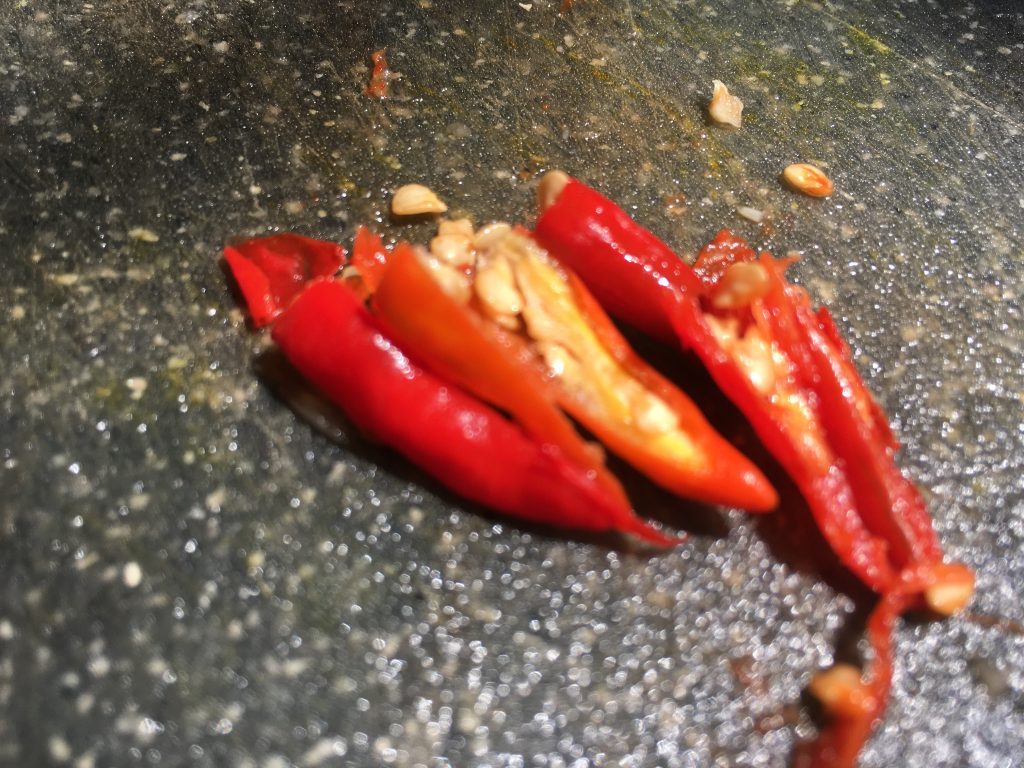 Cut off some unsalted butter from the knob. No need to be specific, just pretty much the approximate thickness of a garlic clove is fine. 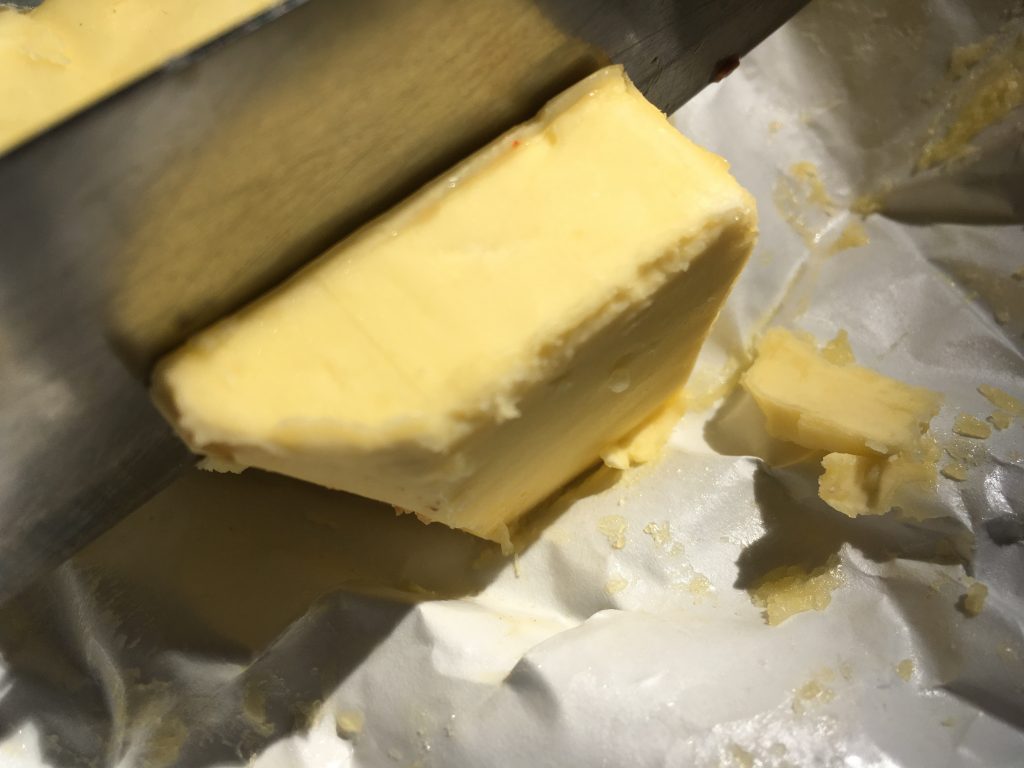 Nice. Now put those in the Pyrex container. 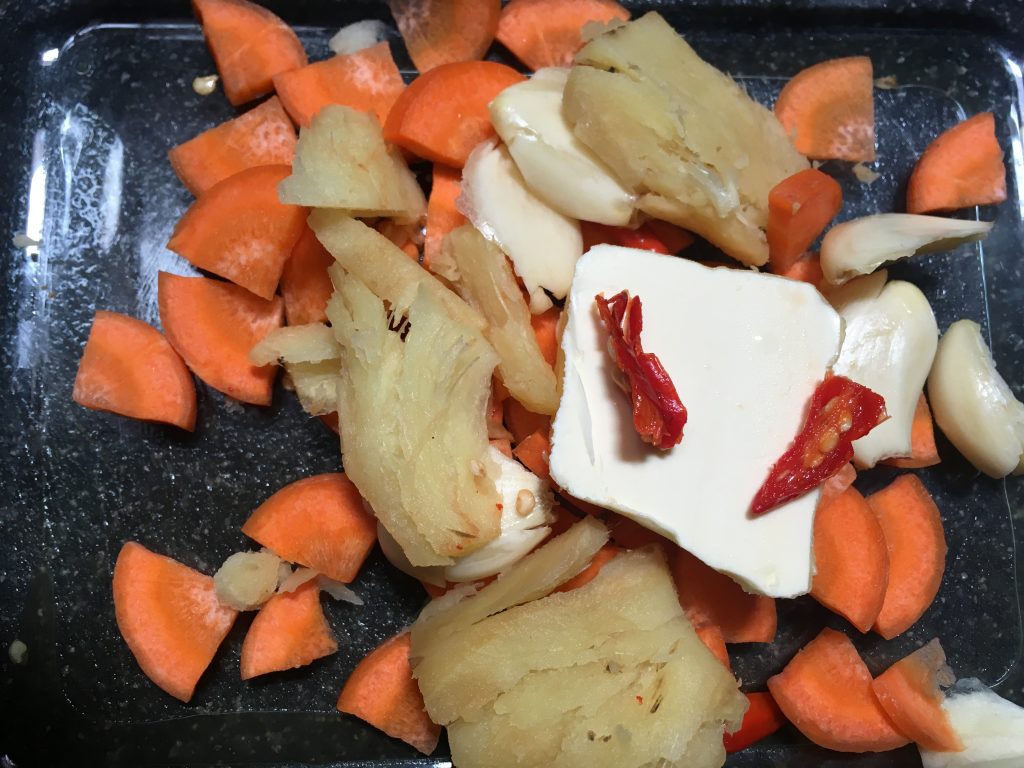 Next, the usual suspects: salt and pepper. I never actually measured the amount before, but I’d say about 1/4 of umami salt (or regular salt) and 3/4 a tablespoon of black pepper. 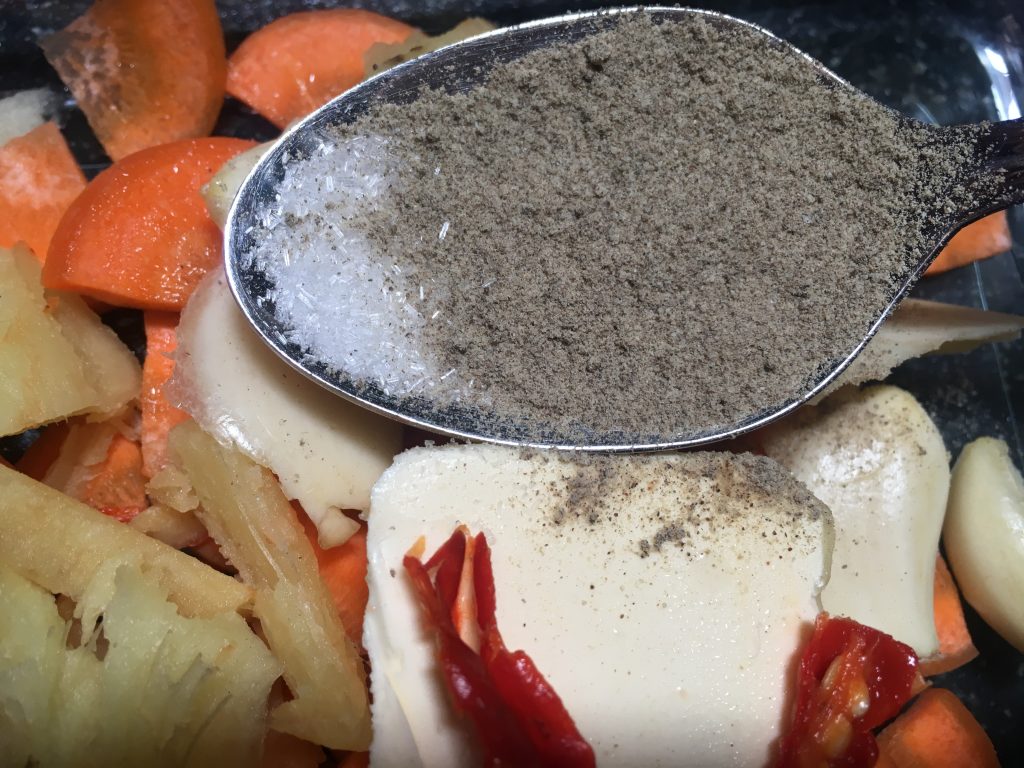 Approximately one tablespoon of oyster sauce. Usually, I just dump it from the bottle straight into the container for 1 second. 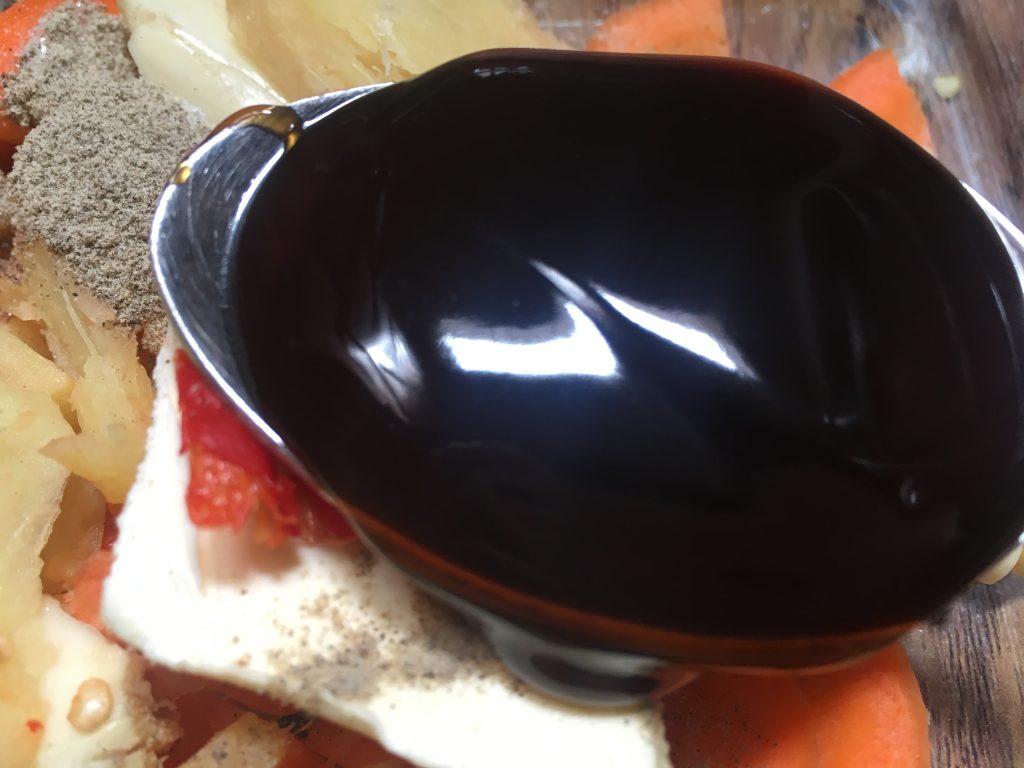 About two tablespoons of honey. Again, approximately. Normally, I just squeeze the squeegee bottle for 2-3 seconds. 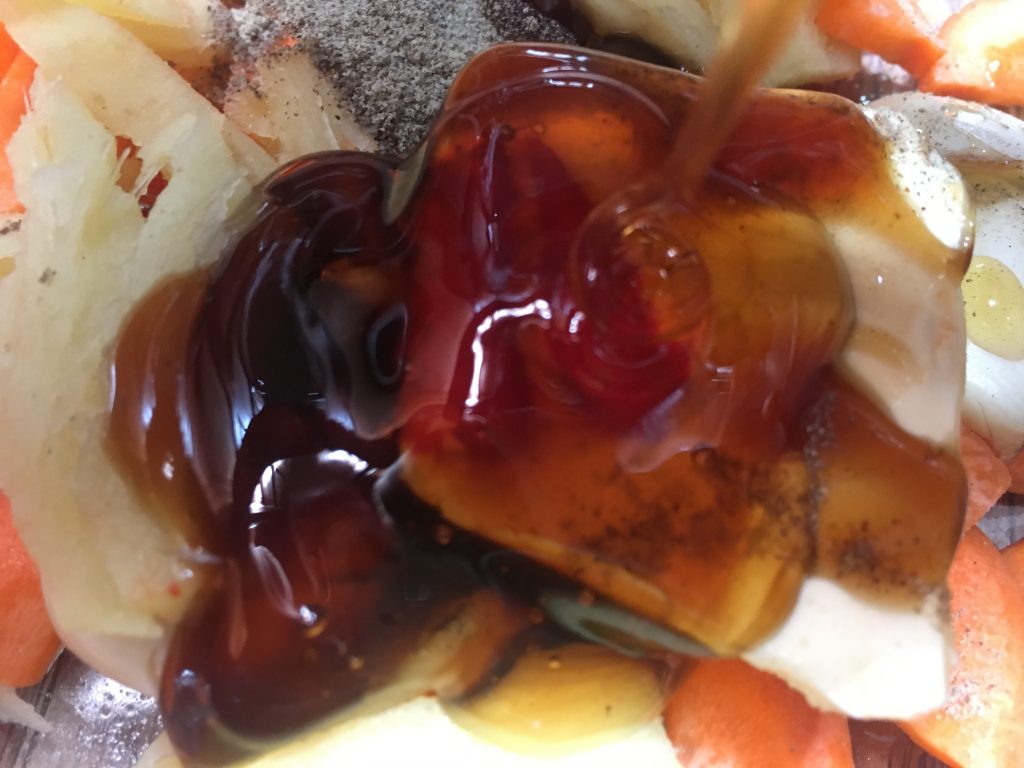 Finally, add a touch of olive oil (or any other oil) in the container on top of the other ingredients.

I usually am able to fit 4 pieces (plus the liver) into a Pyrex container. That should be enough for a day or two. Now, into the container they go. 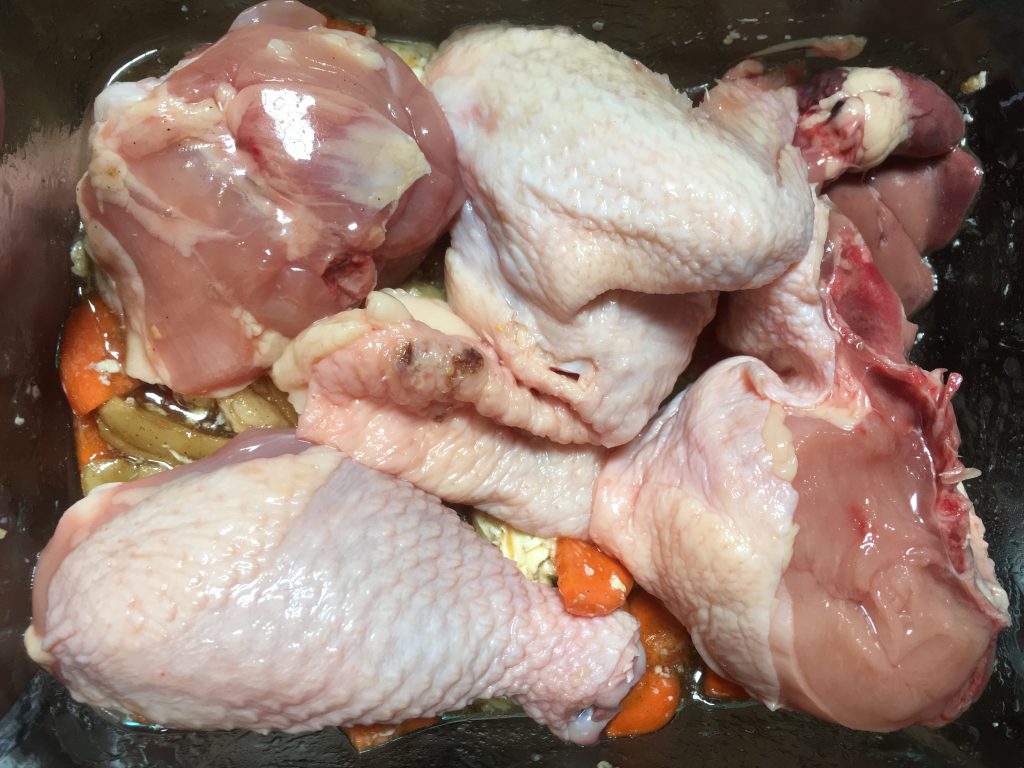 Most of the time, I don’t even bother washing the chicken, but that’s because I trust the supermarkets I buy them from. From my past experience, washing made the flavor dull and I have never, ever gotten food poisoning.

Just remember to wash your hands thoroughly afterward. However, if you feel like you have to wash it, then wash it. Your call, really.

Cutting the chicken is also your choice – cut into little bite-size pieces, or just butterfly the chicken breast, or whatever, really. For most people, I’d say it would be best to just get pre-cut chicken.

Self-explanatory. Try to massage the ingredients into the chicken, but there is no need to be so thorough. 10 to 15 seconds of just clumsily rolling the stuff around should be good. 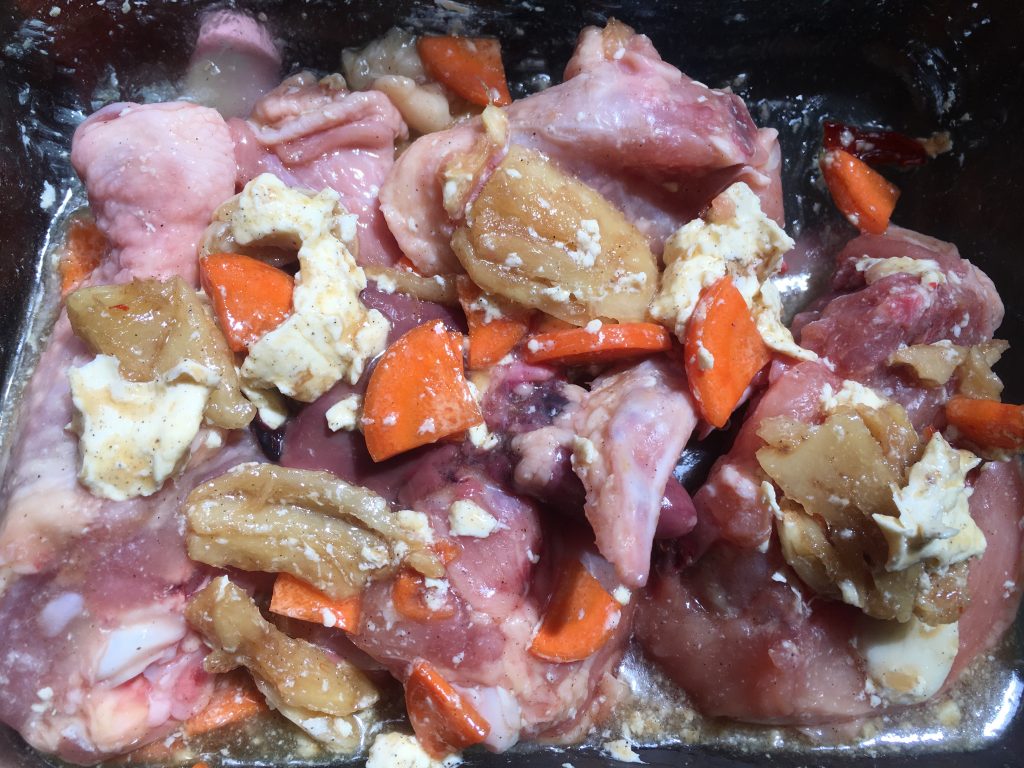 The messier it looks, the better it will taste. You might want to use disposable plastic gloves, but they are not necessary.

Ideally, we would have finished even before the 10-minute timer alarm goes off. Just put the container in the oven at about 6 inches from the top coil. 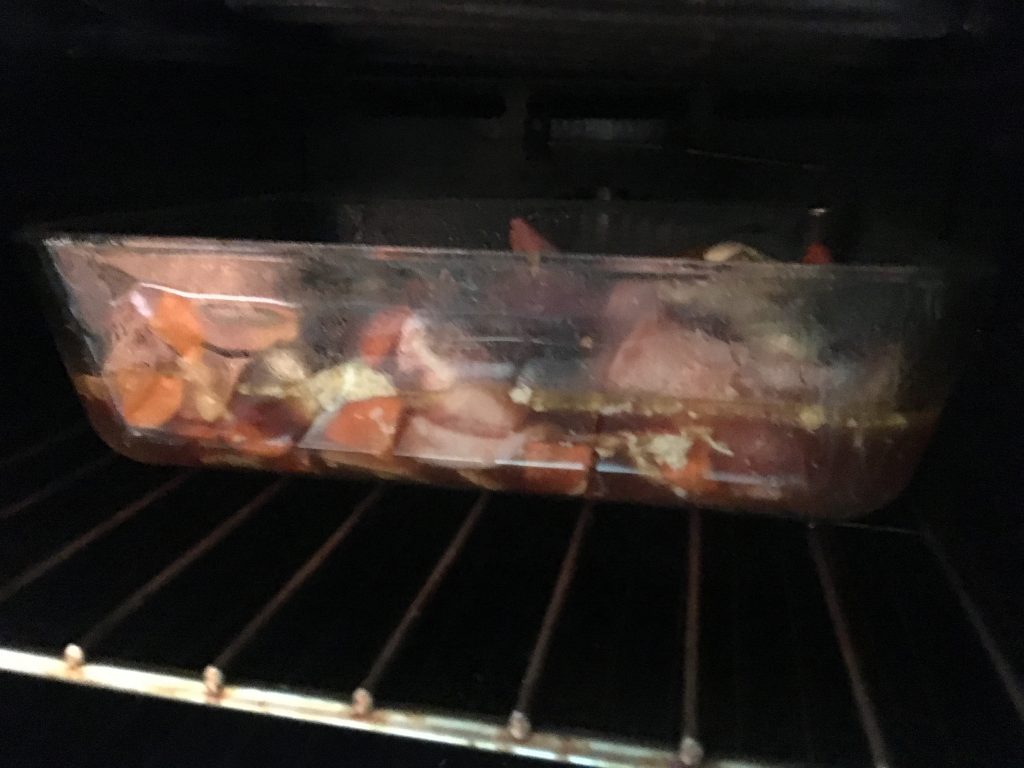 Since we’ve already set the temperature at 180 Celcius or 350 Fahrenheit, there’s no need to change any settings. Hey Siri, another 10-minute timer, please.

And now, we wait. Do some other stuff in the meantime. Cook some rice, maybe? Or steam some vegetables. Play video games, stare at the phone, etc.

After 10 minutes have passed, open up the oven with those cute oven mitts you bought on impulse last week. Be prepared to be embraced by a delicious blend of sweet and spicy aroma that never gets old. 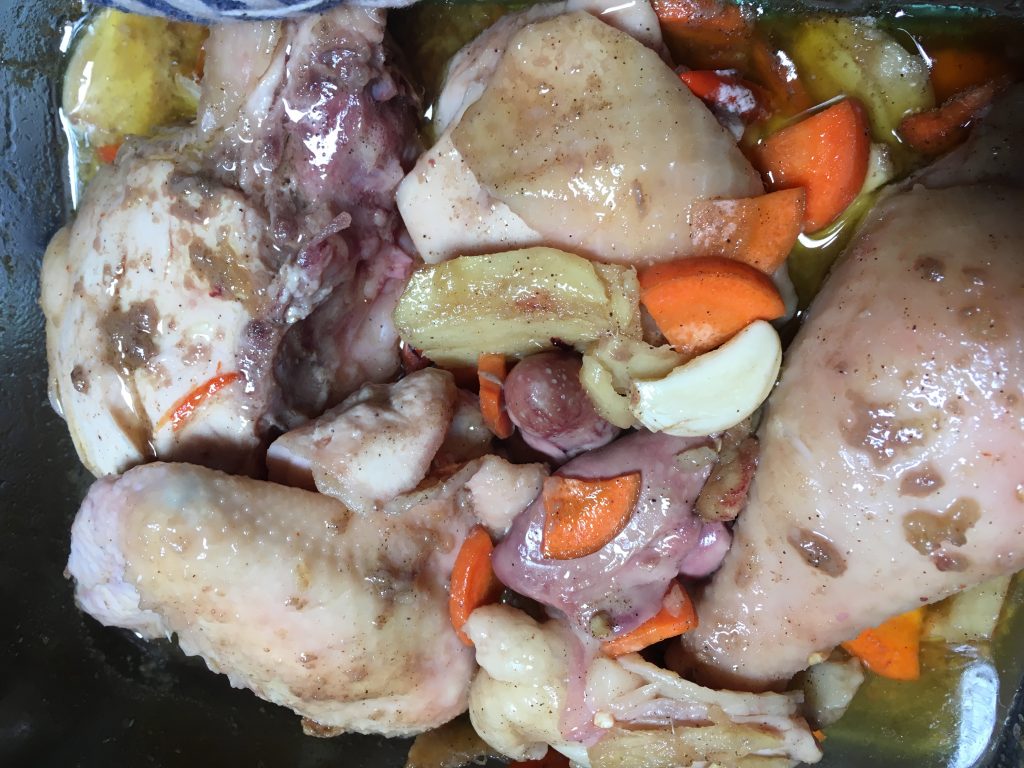 After the other 10 minutes have passed, take out the container and inspect the chicken pieces. Do they seem thoroughly cooked? If not, back in the oven for 3 minutes, and crank it up to 200 degrees Celcius (~390 degrees Fahrenheit).

Everything seems fine? Awesome! Ideally, let it rest for a few minutes. Just serve it in the container. It’s hot hot hot, so remember to set the container on a piece of cloth (or coaster or something) to not damage your table. 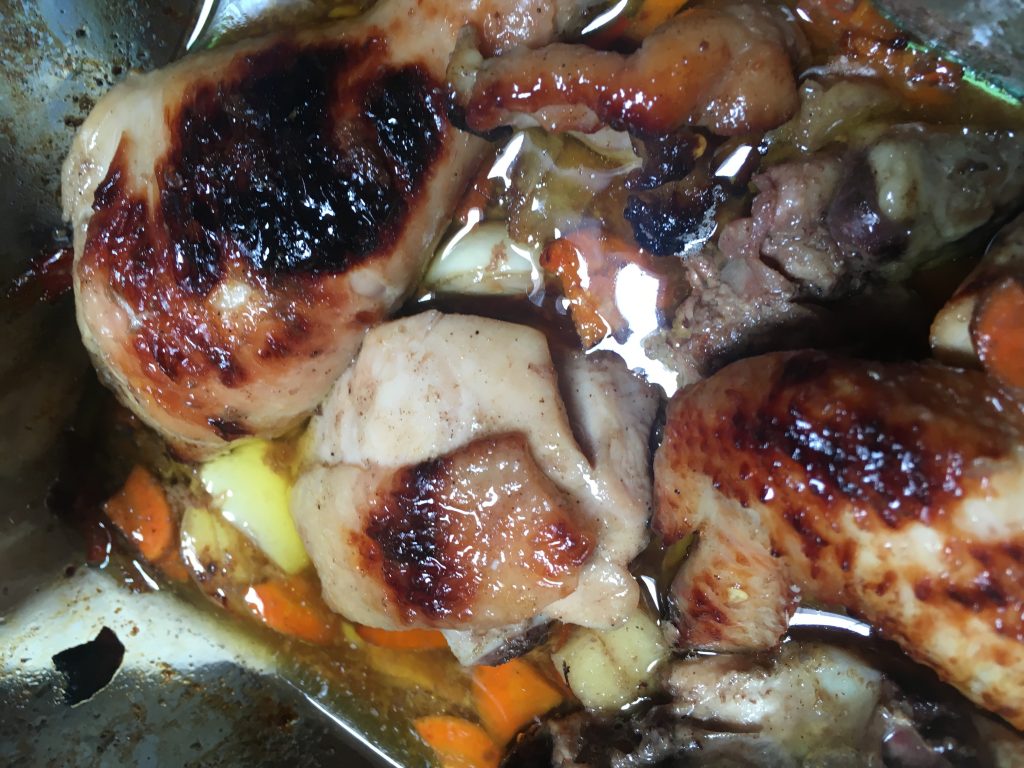 Usually, I like to eat it with rice and bok choy and perhaps some mushrooms. Below is a photo I took some time ago. Looks so salivating, doesn’t it? 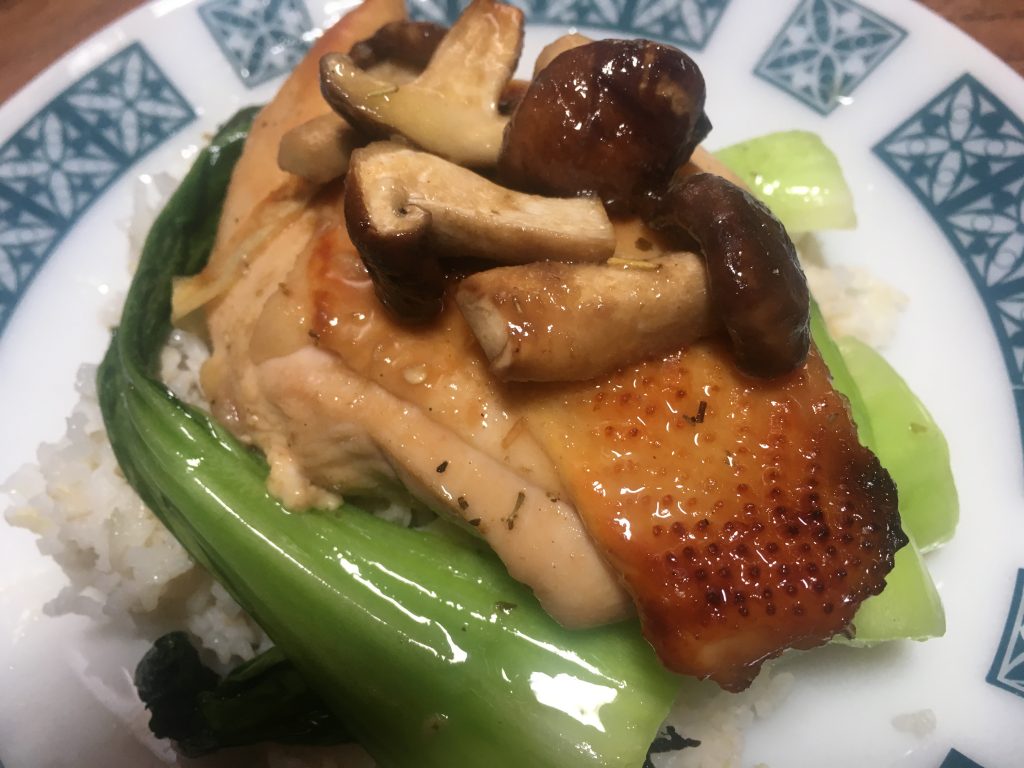 There will most likely be leftovers. That’s why I like to use those Pyrex containers – simply put on the lid and store in the fridge straight away. Pretty convenient, yeah?

The leftovers can be used to make quick sandwiches, burritos, samosas or even spring rolls. Add cheddar and ketchup for some extra zing. 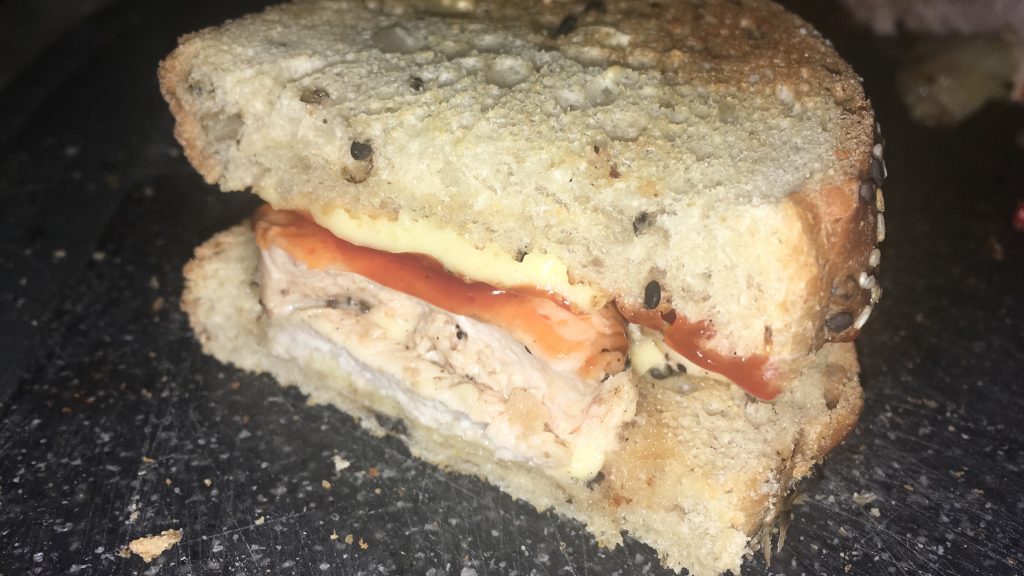 Oh, that reminds me…the gravy. Is it called the sauce or the gravy…or…broth? I’m still not sure. Anyway, do NOT throw the gravy out! It’s so filled with flavorful goodness that can be used to cook, say, fried rice or pasta dishes. You can even use it as a flavoring for croutons.

(1) If you want the chicken to have a bit more of a golden hue, put a tablespoon of soy sauce. It doesn’t really affect the flavor profile much, but the improved color can help with the presentation aspect. Useful for impressing people, I guess.

(3) Probably obvious, but marinading overnight, or even a few hours, will significantly improve the chicken’s taste. This seems pretty cumbersome, however.

This website uses cookies to improve your experience while you navigate through the website. Out of these, the cookies that are categorized as necessary are stored on your browser as they are essential for the working of basic functionalities of the website. We also use third-party cookies that help us analyze and understand how you use this website. These cookies will be stored in your browser only with your consent. You also have the option to opt-out of these cookies. But opting out of some of these cookies may affect your browsing experience.
Necessary Always Enabled
Necessary cookies are absolutely essential for the website to function properly. This category only includes cookies that ensures basic functionalities and security features of the website. These cookies do not store any personal information.
Non-necessary
Any cookies that may not be particularly necessary for the website to function and is used specifically to collect user personal data via analytics, ads, other embedded contents are termed as non-necessary cookies. It is mandatory to procure user consent prior to running these cookies on your website.
SAVE & ACCEPT
Follow